Showing posts from January, 2018
Show all

Night in the Woods 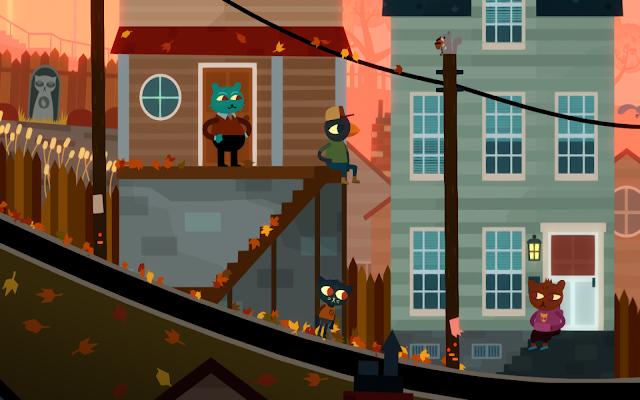 You've probably heard about Night in the Woods even if you haven't played it, or have only a vague idea what it is.  Released by indie studio Infinite Fall last year after a highly-successful kickstarter campaign, the game, an adventure-slash-ghost-story starring anthropomorphic animals who live in a dying Rust Belt town, is an irresistible combination of cute and spooky.  Its story, in which twenty-year-old college dropout Mae returns to her home of Possum Springs, reconnects with her friends and family, and slowly begins to realize that there are dark doings afoot, seems designed to appeal to a certain type of young fan, with its themes of early-adulthood aimlessness, coming of age, and mental illness.  Graphics from the game have been cropping up on my twitter feed and tumblr dash for months, almost instantly iconic due to the game's simple yet evocative (and expertly-executed) design.  What surprised me, however, when I finished the game last week and went looking f
4 comments
Read more

Introducing A Political History of the Future at Lawyers, Guns & Money

January 14, 2018
The political blog Lawyers, Guns & Money has been a favorite hangout of mine for years, both for its sharp and often funny discussions of progressive politics, and for its vibrant, intelligent comment section.  As well as being political junkies, many of the bloggers and commenters at LGM are nerds, and the blog has hosted some great pop culture writing, including by Steven Attewell and the late Scott Erik Kaufman.  So I'm pleased and thrilled to announce a new guest series at LGM, A Political History of the Future. As I write in my introduction , the focus of this series will be on works of science fiction and fantasy that address topical political issues, particularly from a progressive point of view.  I'm also interested in how science fiction imagines future societies and how they order themselves, and particularly those that are not dystopias and post-apocalypses.  I'm not necessarily looking for "optimistic" futures, but I am interested in ones that
5 comments
Read more
More posts