Showing posts from August, 2009
Show all

August 31, 2009
My review of Sylvia Kelso's Amberlight and its sequel Riversend appears today at Strange Horizons . Also, if you're not doing so already, check out the short story book club at Torque Control , now in its second week. Last week's monumental and contentious debate on Daniel Abraham's "The Best Monkey" (including a guest appearance by the author) is probably a one-time fluke, but there is already an interesting spectrum of opinion on this week's story, "A Tiny Feast" by Chris Adrian, which will probably warm up as people return from their weekend.
Post a Comment
Read more

August 24, 2009
Alright, so it is summer. And there's nothing to watch on TV. And even if there were, it's too hot to concentrate on anything more challenging than fluff. And it's going on several years since there was any space-set science fiction on our screens that didn't have the word Galactica or Stargate in its title. Even so, there's no excuse for watching Defying Gravity , the new series about a six-year mission around the solar system billed as ' Grey's Anatomy in space.' It's not just that Defying Gravity delivers exactly what that none-too-appetizing pitch promises, but that it's not even as enjoyably trashy as Grey's Anatomy . It takes special skill to wring the tension and melodrama out of a scene in which the female lead has been blown out into space by a malfunctioning airlock door while wearing a leaky spacesuit and the male lead has to keep her conscious as he reels her back into the ship, but Defying Gravity 's writers are sti
15 comments
Read more 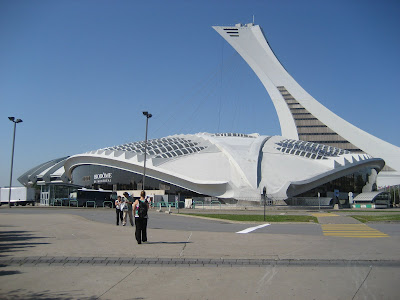 I'm back! And a mere 38 hours after walking through my front door (after 37 hours of wakefulness), feeling more or less recovered. Worldcon was, well, you name it--fun, exhausting, weird, illuminating, disorienting and invigorating. I feel very motivated to dive right into writing and talking about genre with a redoubled enthusiasm, and hopefully that feeling will last as I get back into the daily rhythm of work and ordinary life. I have a couple of writing assignments due by the end of the month, but I also hope to get the blog back on track, to which end the gigantic pile of books now threatening to cave my desk in will no doubt be a great help. More thoughts: Montreal: quite lovely, and with a more European flavor than any other North American city I've been to. That presumably has something to do with the fact that the city's bilingualism is mostly an official thing--outside of the con, I heard French almost exclusively, but the Montrealers I interacted with also had
8 comments
Read more

Off to See the Worldcon

August 03, 2009
In a couple of hours, actually, but the time between now and then will be spent packing, remembering things I've forgotten to pack, repacking, and fretting about the other things I might have forgotten. As usual, I won't be receiving e-mails in my absence, and though I may see blog comments I probably won't reply to them. Expect me back some time next weekend, though possibly not in blogging form until some time later. I leave you with the following: Strange Horizons is having its annual fund drive. I'm obviously biased, but I think Strange Horizons is a fantastic magazine, and, my own contributions completely notwithstanding, my favorite source for online genre criticism. More details about the drive can be found here , and here's a list of prizes to be raffled off among contributors. Forget Avatar and District 9 , the most exciting thing to come out of this year's Comic Con is the Middleman 13th episode table read, which some kind and enterprising s
Post a Comment
Read more
More posts