Showing posts from March, 2011
Show all

March 31, 2011
Over at the Strange Horizons blog, I've published a call for reviewers , and particularly female reviewers.  This is a follow-up to Niall Harrison's recent project to examine how genre review venues break down according to gender.  Click through to read more, and if you're interested in writing for Strange Horizons , by all means drop me a line.
Post a Comment
Read more

March 25, 2011
This week's Strange Horizons reviews kick off with one of the most talked-about books of the last few months, Jo Walton's Among Others , which charms reviewer Michael Levy by being as much about the experience of being a genre fan as a genre story itself.  Graham Sleight takes a look at the seemingly puzzling combination of Michael Moorcock and Doctor Who tie-in novels in Doctor Who: The Coming of the Terraphiles , and concludes that the groundbreaking author and the classic-but-revitalized TV series have a lot in common.  Today's review is of the anthology Sprawl , edited by Alisa Krasnostein, a collection of fantastic stories by Australian authors from Twelfth Planet Press that deeply impresses its reviewer, Dan Hartland.
1 comment
Read more

March 18, 2011
This week's Strange Horizons reviews kick off with Matthew Jones's take on Caprica , which is a little more negative than mine and, interestingly, more concerned with the technological questions raised by the series's premise, which the show neglected in favor of political and social storylines and, of course, soap opera.  On Wednesday, Hannah Strom-Martin reviews the anthology Machine of Death: A Collection of Stories About People Who Know How They Will Die , which I (and I think Hannah too) had taken as nothing but a gimmick, but which she finds surprisingly thoughtful and worthwhile.  Today, David McWilliam reviews Charles Stross's latest Laundry novel, The Fuller Memorandum , which he thinks is a welcome return to form after the disappointing Jennifer Morgue .
Post a Comment
Read more

March 17, 2011
A year ago, when Being Human concluded its second season, I was pretty sure I was done with the show.  Being Human 's first season was a fun but underbaked affair, clearly too charmed by its own premise--a vampire, Mitchell, a werewolf, George, and a ghost, Annie, who move into a house in Bristol--to do very much with it.  The show's second season took that premise and ran with it, and the result was not only a poor piece of storytelling, but morally revolting.  Having rid himself at the end of the first season of his genocidal sire-turned-enemy Herrick and thrown in his lot with humanity, Mitchell discovers that his human girlfriend Lucy is in league with the preacher Kemp, who has sent men to kill Mitchell.  Mitchell takes out his anger over Lucy's betrayal on all of humanity, waylaying a passenger train and slaughtering the twenty people on board, but the season ends by concluding that Lucy and Kemp are the true villains.  "Look at us both, covered in other peopl
9 comments
Read more

March 15, 2011
The results of the Strange Horizons 2010 readers' poll are in , and, alongside such winners as Theodora Goss (best short story), Marge Simon (best poem), and Orrin Grey (best article), I'm stunned to announce that I was voted best reviewer.  I'm joined in that category by Adam Roberts, Niall Harrison, Matthew Cheney, and Farah Mendlesohn, which is such an august group of reviewers that I can't believe anyone would rank me above them. Thanks a lot to everyone who voted, and congratulations to the other winners. Genevieve Valentine joins Strange Horizons as a columnist this week, and her first column is about reading the film Winter's Bone as a fairy tale.  I saw Winter's Bone just last week, and at the Strange Horizons blog I discuss Genevieve's column and some of my reactions to the film. Actually, the absence of a thing: I've let my series about the Strange Horizons review policy lapse for, quite frankly, lack of time.  I'm hopeful th
Post a Comment
Read more

March 11, 2011
This week's Strange Horizons reviews kick off with Richard Larson's discussion of one of the most talked-about science fiction novels of the last year, Charles Yu's How to Live Safely in a Science Fictional Universe , with Richard joining in the novel's near-unanimous praise.  On Wednesday, Andy Sawyer puzzles over Ken MacLeod's The Restoration Game , and the meaning of its twist ending.  Today's review , by Duncan Lawie, is of a debut that we might have called urban fantasy a few years ago when that term had a very different meaning, Ben Aaronovitch's Rivers of London ( Midnight Riot in the US).
Post a Comment
Read more 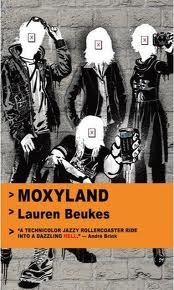 Some of the books I never got around to writing about in the women writing SF project, and a few of the ones I've read since then. Moxyland by Lauren Beukes - I found a lot to be impressed by in Moxyland , one of the most talked-about debuts of the last few years.  What I didn't find was a novel.  The book feels like a demonstration of Beukes's talent--for worldbuilding, for constructing interesting and flawed characters, for bravely taking her story to its dispiriting conclusion--but its pieces don't come together into a greater whole.  Which is not to say that Moxyland isn't worth reading.  The setting--a future South Africa in which corporations and government have become indistinguishable--is a nice blend of cyberpunk tropes, real-world problems taken to the nth degree, and the strangeness of a foreign country with a troubled history.  A lot of the devices Beukes deploys are familiar--cell-phones are necessary for everything from buying food to using public
2 comments
Read more

March 04, 2011
This week on Strange Horizons , Nader Elhefnawy rounds off February with his review of L.E. Modesitt Jr.'s Empress of Eternity , which Nader thinks has its strong points, but is ultimately a disappointing execution of an interesting premise.  Dan Hartland kicks off March on a more positive note, with a glowing review of Zoran Živković's short novel The Ghostwriter .  Continuing the trend, C.B. Harvey is also quite pleased with Col Buchanan's debut fantasy, Farlander .  John Clute is less cheerful in the latest installment of his column Scores , in which he is decidedly unimpressed by three recent novellas, Tobias Buckell's The Executioness , Paolo Bacigalupi's The Alchemist , and Elizabeth Bear's The White City .
3 comments
Read more
More posts