Showing posts from September, 2007
Show all

September 30, 2007
A few more responses to the week's premieres: Dirty Sexy Money : This year's winner of the Desperate Housewives award for worst series name revolves around an attorney, Nick George, who is persuaded to take over his recently deceased father's role as retainer, fixer, consigliere and confidant to a super-duper-wealthy Manhattan family--father, mother, and five supremely spoiled and screwed-up kids. It's an intriguing premise, and yet its execution is so dull. While the older generation of the Darling family are at least a compelling rendition of the cliché of how wealthy people behave--a mixture of graciousness towards their social inferiors and ruthlessness when their desires are thwarted--the kids are stock characters--the senatorial nominee who is having a tawdry affair; the older daughter who bounces from one fortune-hunting husband to the next; the drug-addled screw-up and the spoiled princess. The only breath of fresh air comes from the semi-deranged priest, w
6 comments
Read more

September 27, 2007
Hotel Chevalier , the short film that acts as a prologue to Wes Anderson's upcoming The Darjeeling Limited , is now available as a free download from the iTunes store (link from here , you'll need to have iTunes installed, but it is available for both Mac and Windows). Though they are undeniably precious, I'm a big fan of Anderson's films. I can't help but wonder, however, whether he didn't peak with The Life Aquatic With Steve Zissou . The trailer for The Darjeeling Limited suggests that it's that preciousness (as well as his quirky visual sensibility) that Anderson is stressing in this film, and I have a strong suspicion that he is very close to going overboard with it.
8 comments
Read more

Thoughts on the New TV Season

September 27, 2007
Due to a confluence of cancellations, odd scheduling, and dwindling interest on my part, there are only three shows-- Heroes , Stargate: Atlantis , and Dexter --returning this month that I watch regularly. Never fear, right? With a dozen or so new shows starting up, there's bound to be at least one or two that I don't hate and that survive past six episodes. Well, I'm not certain yet, but here are my reactions to a few of this week's pilots: Journeyman : Kevin McKidd is a journalist with a lovely wife and cute kid who begins randomly popping into the recent past. There he encounters his deceased former girlfriend (who, in the present, turns out to be very much alive, though traveling through time just like him) and discovers that it's his job to protect certain people--in the pilot episode, he has to first arrange for the birth, and later protect the life, of a young prodigy. Journeyman has very little but McKidd and its sumptuous production values to recommen
16 comments
Read more

September 24, 2007
My review of two novels, Ice and Guilty , by late and little-known author Anna Kavan, appears in today's Strange Horizons . These are creepy, disturbing novels, and well worth a look.
2 comments
Read more

They Made Him Do It

September 23, 2007
Via Israeli film critic Yair Raveh comes the trailer for Richard Kelly's upcoming Southland Tales . Kelly burned off a lot of my goodwill with the agonizingly awful director's cut of Donnie Darko , and Southland Tales 's by-now infamous reception at last year's Cannes festival (which necessitated a radical recutting of the film into its present form) reinforces my suspicions that Kelly needs a strong hand to steer him away from his tendency towards pretentiousness. That said, the trailer itself gives off the same impression of grandeur and profundity that made me so eager to see Donnie Darko after watching its trailer, and which the film itself came very, very close to delivering. I am, in spite of my reservations, eager to see this. In other movie-related links, Kit Whitfield's reading of Brad Bird's The Incredibles offers a compelling explanation for all the skeevy quasi-fascist undertones in that film (link via Torque Control ), and this humorous (I
4 comments
Read more

The Least-Liked Austen: Thoughts on Emma

September 21, 2007
I don't know if this is still the case, but when I was growing up it was customary to give books as Bar- and Bat-Mitzvah presents. These were usually of the 'serious' variety--handsome coffee table books and hefty reference volumes. I got my share of each, and leafed through the former and used the latter for schoolwork, but the gift that has proven the most enduring, and from which I've gotten the most use and the most pleasure, was a set of six unassuming paperbacks--two Wordsworth Classics and four Bantams--of Jane Austen's novels. I think every voracious reader can name several books the gift of which opened their eyes to a new literary vista and shaped them as a reader, and for me this was one of those occasions. I made my way through the six Austens over the next five or six years. Some of them-- Pride and Prejudice and Persuasion --have become staples of my reading diet, books that I return to periodically to discover new aspects or take pleasure in the
19 comments
Read more

An Idea Whose Time Has Come?

September 20, 2007
The Last Starfigher: The Musical I know I'm far from being the only person with a soft spot for this cheesy Star Wars knockoff, but this is still a peculiar notion. I guess the idea is that the thrills which, in the film, were supplied by effects-laden space battles will be substituted by the thrill of watching energetic song-and-dance numbers. I'm actually going to be in New York next month. I don't arrive until after the show's run ends, but if I had the chance I'd be sorely tempted to give this show a look. (Via Ed )
3 comments
Read more

Lots of high-profile books on my reading list for the last few months, as well as a few that are older and less renowned. Here are some thoughts on the bunch, which has ended up encompassing some of the best and worst reads of the year. The Astonishing Life of Octavian Nothing, Traitor to the Nation, Vol. 1: The Pox Party by M.T. Anderson - Anderson's YA novel about slavery and the American revolution has received ebullient and ecstatic praise from sources far more prominent and noteworthy than myself, and I had been reading it for a while and enjoying myself without quite feeling that the fuss had been justified until somewhere around the halfway point, when I suddenly realized that my heart was breaking. The title character and his mother are slaves in the house of a natural philosopher in Boston, who is conducting an experiment to see how Africans respond to a European education--whether their 'natural predilection' for savagery can be taught out of them. The first hal
3 comments
Read more

There are a lot of good things I'd like to say about Brian Francis Slattery's debut novel, Spaceman Blues , a lot of ways in which it is a successful and remarkable novel. But the one that stands out most prominently and impressively is the fact that this novel manages to do so much with so little. I've spoken about my admiration for short novels before, and specifically for the ones whose authors posses the ability to write essentially, to establish a sense of place with a page, a character or community with a paragraph, and a relationship with a sentence. Spaceman Blues , at a mere 219 pages, is one of those novels, with a breadth of scope and imagination that puts me in mind of the early novels of John Crowley (most especially The Deep ). Like Crowley, Slattery knows how to colonize and infest his readers' minds, so that characters brought to life by a single sentence live, love, and grow old in our imagination. When a police detective is needled by his partner for
Post a Comment
Read more

I Promise Not to Make a Habit of This 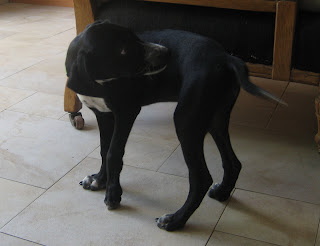 But look! A puppy! Her name is Luna. She's a mixed Pointer, about two months old. In the 30-something hours she's been in the house she's managed to steal two shoes and do something adorable about once every three seconds. She's also figured out what the kitchen is for, and has perfected her dinner-table mournful stare (sadly, to no effect). Adoptive big sister Belle is dubious about the entire exercise, but recognizes that the foolishness of humans is something to be tolerated. If the fish have an opinion they have, thus far, kept it to themselves.
5 comments
Read more
More posts