Showing posts from January, 2007
Show all

Wait, Can We Go Over That Again? Thoughts on Primer

January 27, 2007
"How do cellphones work?" Abe, one of the protagonists in Shane Carruth's ultra-low budget 2004 SF film Primer , asks his friend Aaron, at a point near the film's midpoint. The line is delivered with some urgency, and with good reason--depending on the answer, Abe and Aaron may have just created a time-travel paradox. This is one of the standard landmarks of the SF or technological thriller film--the point at which a seemingly safe scientific discovery goes off the rails--and as he does throughout the entire film, Carruth chooses to present it in a non-standard manner. Whereas in another film, the characters' emotions would be at the forefront--they would swear, or go very silent, or take on a terrified expression--in Primer , Abe and Aaron's fear is expressed through an urgent quest for knowledge, the acquisition and application of which takes up the bulk of their waking hours. Since it gained significant acclaim at the Sundance film festival (where it won t
9 comments
Read more

January 25, 2007
Life on Mars season 2 teaser . Apparently this is a clip from an episode, which explains why it cuts off so abruptly, and boy is it strange. Still no sign of a premiere date, though.
1 comment
Read more

I Have the Coolest Little Brother in the World 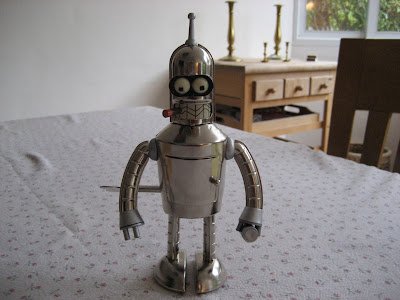 Behold my slightly-belated birthday present: As you might have gathered from the key in his side, this is a wind-up toy--Bender walks. He also comes with a detachable stogie and a can of Mom's Robot Oil. ( Available from , since I know some of you will want to know.)
3 comments
Read more

January 18, 2007
Over at Strange Horizons , Dan Hartland writes about Battlestar Galactica so I don't have to, and is, as usual, thoughtful and eloquent on the subject: Moore these days seems almost exclusively interested in the endpoint rather than the journey. So "Unfinished Business" needs to be a story about Apollo and Starbuck's relationship, and thus crafts an entirely unconvincing sequence of flashbacks to justify the resuscitation of their on-again off-again love affair. We are expected to accept this ret-con of the characters without question, even as we beg to know why not a hint of this sudden backstory has been dropped before. Similarly, in "Hero," Adama reveals that just prior to the Cylon attack on the colonies he had led an illegal incursion into Cylon space, thus arguably provoking the machines' devastating onslaught. The viewer resents such massive elements of backstory being conjured from nowhere. This is not merely another permutation of the show'
7 comments
Read more

If Only Someone Had Done This With Harry Potter

January 17, 2007
Dark Horizons reports : HBO .. plans to turn George R.R. Martin's bestselling fantasy series "A Song of Fire and Ice" into a drama series by David Benioff ("Troy", "Wolverine") and D.B. Weiss ("Halo"). ... Variety indicates that the series will begin with the 1996 first book, "A Game of Thrones," and will turn each novel into a season's worth of episodes I was profoundly unimpressed by A Game of Thrones , but as in the case of The Prestige , an adaptation into the visual medium will automatically get rid of the novel's greatest weaknesses--Martin's indifferent prose and absurd verbosity. Once these steps are taken, there's probably enough potential in the core story for Benioff and Weiss to make something of merit--I'm quite curious to see how an epic fantasy fares on the small screen.
2 comments
Read more

Everything's Already Been Said About the Movie, The Prestige Edition

January 14, 2007
I confess, in spite of the praise heaped on Christopher Nolan's The Prestige from almost all quarters, I was somewhat reluctant to go see it. Similar praise, after all, had been heaped on the Christopher Priest novel of the same name, of which the film is an adaptation, and it was and still remains one of the most unimpressive pieces of fiction it has ever been my misfortune to read (admittedly, the soporific experience of reading The Prestige takes on an almost rosy glow when compared to the one I had reading Priest's Clarke-winning The Separation , a very strong contender for the worst novel of my reading life). To my relief and delight, Nolan's version of the story is truly as fine as its fans would have had me believe--a clever, cleverly-made film, at the same time suspenseful and thoughtful, and full to the brim of observations about stage magic, showmanship, and the sacrifices that both entail. Most interesting to me, as one of the half-dozen people on the planet
13 comments
Read more

Hopefully, This Version Will Have an Actual Ending

January 13, 2007
Diamond Age, based on Neal Stephenson's best-selling novel The Diamond Age: Or a Young Lady's Illustrated Primer, is a six-hour miniseries from [George] Clooney and fellow executive producer Grant Heslov of Smokehouse Productions. ... Stephenson will adapt his novel for the miniseries, the first time the Hugo and Nebula award winner has written for TV. The full story is here , and includes descriptions of other projects the Sci Fi Channel has in development (the 'behind the scenes of a long-running space opera' comedy sounds like it might be cute). ( Via )
Post a Comment
Read more

Moby Dick: Portrait of the Blogger as a Young Reader and Other Thoughts

January 12, 2007
...the chapters on whaling in Moby Dick can be omitted by all but the most punishment-loving readers... William Goldman, The Princess Bride I made my first stab at Herman Melville's Moby Dick at the age of sixteen (and, just to get this out of the way as quickly as possible, yes, it was because of all the pimping the book was getting on The X-Files ). I made it about halfway and stalled, defeated by the novel's frequent forays into whaling lore--the hierarchy of whaling ships and the roles of each of their crewmembers, whaling techniques and the process of converting a killed whale into salable products, the history of whaling and its customs, and, worst and most stultifying of all, whale biology. But I was annoyed by my inability to deal with a novel so central to the Western canon, and my much-abused copy survived several cullings of my library. One of these days, I would promise myself each time I divided my books into 'save' and 'give away' piles, I'm
8 comments
Read more

What Goes Into a Perfect Battlestar Galactica Action Figure?