Showing posts from December, 2014
Show all

December 31, 2014
I read 47 books in 2014, which, strangely enough, is exactly the same number as I read last year--not sure that's ever happened, and certainly not since I started keeping track.  It was a very odd year too, reading-wise, with periods of intense and enjoyable reading alternating with long fallow stretches in which nothing appealed and the thought of concentrating on a single work was positively wearying.  Nevertheless, looking back at the books I did manage to read this year, I'm impressed with their quality and how much I enjoyed them.  Usually these end-of-year posts include examples of the year's worst reads as well as the best ones, but this year I don't really have any nominees for the former category.  The closest I came to a bad book this year was Dorothy L. Sayers's Five Red Herrings , in which Sayers takes her obsession with "fair play" mysteries to unreasonable extremes, bogging the reader down in minute descriptions of the various suspects' m
Post a Comment
Read more

December 21, 2014
In the previous installment of this series, I noted that I was looking forward to watching some more grown-up fare at the movie theater.  Eight months later, I seem to have failed spectacularly at that task.  There are a whole bunch of movies for adults, like Boyhood and Whiplash , that I meant to see and never got around to, and here I am again reporting on the more shlocky end of the scale.  So let's make this a resolution for 2015--watch some more challenging stuff at the movie theater, and if I can't manage that, try to catch up with it at home.  In the meantime, though, here are my thoughts on the movies I have seen. Gone Girl - David Fincher's artful, tense direction can't obscure the fact that this is one of those novel adaptations that are completely inessential if you've read the book (in fact, much like this summer's The Fault in Our Stars , Gone Girl is a case in which watching the movie and reading the book would probably take about the same am
7 comments
Read more 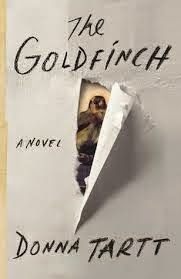 I went through an unplanned blogging hiatus this summer, which meant that a lot of books and movies that I would have liked to write about ended up unreported (though some of them will be showing up in my forthcoming year's best list).  Still, it seemed wrong to end the year without another look at what I've been reading (one of the things I'd like to get back to next year is full-length book reviews, which is something I've let slide, but this will do for now).  Those of you who haven't been following along on twitter (or who have been defeated by its ephemeral format) might also be interested in the conclusion of my read-through of the Sherlock Holmes canon--here are my thoughts on The Return of Sherlock Holmes , His Last Bow , and The Case-Book of Sherlock Holmes . The Goldfinch by Donna Tartt - Tartt's bestselling, Pulitzer-winning novel kicks off with a terrorist bombing in the Metropolitan Museum of Art.  Thirteen-year-old Theo Decker loses his beloved
4 comments
Read more

December 09, 2014
Kind of an obvious insight, but the problem with Sorkin is that when you criticize his shows, you turn into a Sorkin character. — emilynussbaum (@emilynussbaum) December 7, 2014 I had no plans to comment on "Oh, Shenandoah," the now-infamous penultimate episode of Aaron Sorkin's final (?) TV series The Newsroom .  I've tried not to think about Sorkin since I gave up on The Newsroom two episodes into its beleaguered run, when it became clear that the flaws that had marred his previous series Studio 60 on the Sunset Strip --preachy characters who exist only to speechify, regressive politics, an elitism as overweening as it was unfounded, and a genuine disdain for women--were back in force, and it was actually a bit of a shock to discover that he was still capable of arousing as much outrage and indignation as "Oh, Shenandoah" did.  It seemed like a lot more fun to just sit back and watch the wall-to-wall pans appear--from Libby Hill at The AV Club , Emily
8 comments
Read more
More posts