Showing posts from April, 2012
Show all

As I recently mentioned , one of the effects of scrambling for homeownership has been that I've had very little headspace for anything else.  It's not just writing that has fallen by the wayside but also reading, and often these days I find myself more contented with some cheesy TV at the end of the day than a good book.  Hopefully that will change in the coming weeks, and I'll soon have more substantial things to write about my reading, but here are the few books that I have managed to read this year. The Grand Sophy by Georgette Heyer - Whenever I chance upon a discussion of Heyer's Regency romances, the impression that forms is of Jane Austen methadone.  This isn't entirely an alluring description--it conjures images of an author who replicates the frothy surface of Austen's novels without dipping into the acid that lies just beneath it.  In my first foray into Heyer's writing late last year, with Cotillion , that is indeed what I found, but Cotillion
9 comments
Read more

The Cabin in the Woods

April 20, 2012
If you've been following this blog for any amount of time you've probably noticed that I don't have much use for spoiler warnings, or for the primacy that spoilers have gained in the discourse about popular culture.  The conversations I want to have, the ones that seem interesting and worth having, are precisely the ones that don't allow for the self-censorship of spoiler mania, and the truth is that I don't believe that a truly worthwhile work is one that can be "spoiled" simply by knowing what happens next.  So when I say that Drew Goddard's horror comedy The Cabin in the Woods (written by Goddard and Joss Whedon), is the sort of film that rewards unspoiled viewing, that probably seems entirely different to viewers who know its secrets, and that may, in fact, only be worth watching if you're ignorant of its central twist, I'm not being entirely complimentary.  Cabin is a funny, clever, well-made film, extremely effective in its scary scenes
29 comments
Read more 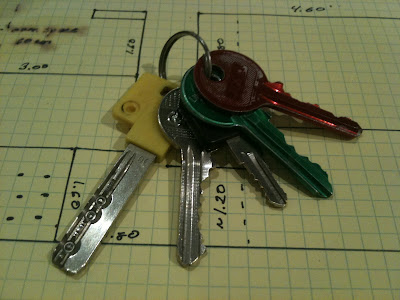 In case you were wondering what the recent dearth of posts was down to.  Of course, now that mere trivialities such as ownership and mortgages have been dealt with, it's time to scale the peaks of renovating, decorating, moving...
13 comments
Read more
More posts