Showing posts from August, 2008
Show all

August 30, 2008
Following a similar experiment a couple of years ago, the folks at Fantasy & Science Fiction magazine offered a copy of their most recent issue to anyone willing to blog about it, and, after taking a look at the issue's table of contents, I happily took them up on their offer. With stories by Geoff Ryman, Stephen King, M. Rickert, Robert Reed and several others, this seemed like a not-to-be-missed entry in the magazine's history, and I was looking forward to writing an exuberant piece about some top-notch short fiction. Sadly, the further I got into the October/November issue, the less I found to be excited about. The big names have turned up, to be sure, but only one of them has delivered on the level I'd expected. Last time I wrote about a F&SF giveaway issue, I complained about the magazine's nonfiction content, and specifically its datedness. What was the point, I asked, of reviewing Ian McDonald's River of Gods months after it had been nominated
10 comments
Read more

A Vacation in Bohemia 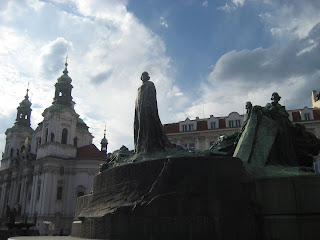 In a word: lovely.  Which encompasses both the experience--I've been in need of some decompression, and it was a chance to spend time with my family and celebrate both my mother's birthday and my brother's discharge from the army--and the setting, for which I need offer no more evidence than the following: On the other hand, dear God is this city expensive.  I've been to many popular tourist destinations in my day, and especially with the Euro so strong at the moment it was clear that this was not going to be a cheap trip, but much as I enjoyed Prague it was hard to escape the impression that this is a city out to bilk tourists for everything they have.  The $3 water bottles (closer to $7 in the real tourist areas), the exorbitant prices at restaurants (which, surprisingly enough, returned to Earth almost as soon as we left the realm of tourist attractions), and most of all, the price of entry to almost every attraction, often completely out of proportion to the bre
2 comments
Read more

August 18, 2008
Just popping my head in to say that I'm going to be vacationing in Prague for the next week--doing my part to make the internet just a little bit deader than it is right now.  As ever, I won't be receiving e-mails, and though I might be able to see comments to the blog I probably won't get around to responding to them before I get back.  Be good.
3 comments
Read more

The summer doldrums are hitting me hard--all the interesting movies have been and gone, for one thing, and there's still nothing to watch on TV. So, have some books. Farthing by Jo Walton - I've resisted Walton's extraordinarily and almost universally liked novel for some time now, having been so singularly unimpressed with previous offering, Tooth and Claw . Tor.com 's policy of releasing selected books from their catalogue under CC licenses, however, inspired me to give Farthing a look and, well, it looks like my first instinct was right. The novel suffers, in fact, from much the same flaws as Tooth and Claw . It has an inventive premise--a Christie-esque country house mystery told in an alternate universe in which Britain made peace with Hitler and, in the late forties, is slipping, much like the rest of the world, into fascism and institutionalized xenophobia--and is for a time energetic and enjoyable, but soon begins to flag and drag, giving the impression of
5 comments
Read more

August 11, 2008
My review of The X-Files: I Want to Believe , appears today at Strange Horizons . Shockingly, it is not positive. If you've clicked through from there you might also be interested in my posts about Wall-E and The Dark Knight .
2 comments
Read more

August 05, 2008
Reviews of The Dark Knight are cropping up all over, but I'm going to go out on a limb and say that Rick Norwood's at SF Site is, by far, the weirdest. It starts out normally enough, commenting on the film and praising, in particular, Heath Ledger's performance as the Joker. Then, at about the halfway point, we get this: Is The Joker on drugs? Heath Ledger died from an accidental overdose of prescription drugs. Was he taking drugs when he played The Joker? I don't know, but I hope not. Good as The Dark Knight is, it is not a film worth dying for. Believe it or not, it gets even more mind-boggling. The review proceeds in what can only be called a stream of free associations, as Norwood muses on drug-addled artists of the past, America's hypocritical attitude towards drug use, George W. Bush's drug history, and racism. Each thought is only tangentially related to the one before (or indeed to the sentences preceding and following it), and has absolutely noth
3 comments
Read more
More posts