Showing posts from September, 2012
Show all

Bring Up the Bodies by Hilary Mantel

September 29, 2012
Here's a recommendation: even if you've already read it, take the time to reread Wolf Hall before reading Bring Up the Bodies .  This is less in order to be reminded of details from the first volume of Hilary Mantel's projected trilogy about the life of Thomas Cromwell--Mantel is actually quite good about catching up readers who haven't read Wolf Hall or read it a while ago, and anyway the broad strokes of the history it describes are well known--but because such a reading actually shows both books in the best light.  Wolf Hall is a much easier novel to appreciate when freed of the hype that surrounded its Booker nomination and victory in 2009, and even more than that, when approached as the first volume in a trilogy rather than a complete novel, and Bring Up the Bodies feels like a more complete, more polished work when compared to its accomplished but undeniably baggy and overlong predecessor.  This is, of course, largely down to subject matter and scope-- Wolf Ha
7 comments
Read more

September 19, 2012
Well, here we are again, in fall pilot season.  As has become traditional, we have a drizzle of new shows this week, followed by a deluge next week, so for now I'm fresh and energized enough to write quite a bit about each new show.  By next week, I suspect, I'll be a little more punchy. The Mob Doctor - I try not to be one of those people who assume that cable television is inherently superior to network television, and who say, of every failed network show, that it would have been so much better on HBO.  This is not only because there's plenty of excellent network TV out there, but because cable TV has its own set of tropes and core assumptions that I would hate to see television become consumed by, such a tendency to treat sexual violence and female nudity as hallmarks of artistic maturity, and a preference for borderline- or outright-psychopathic male leads that relegates female character almost exclusively to the contingent roles of love interest and caretaker.  It
11 comments
Read more

September 15, 2012
Telegraph Avenue , Michael Chabon's eighth novel, is the most low-concept thing he's written since the last century.  For a little over a decade, Chabon has been the standard-bearer for the intermingling of genre tropes and literary fiction (and the writer to whom genre fans would frequently point to as an example of an outsider who "gets it" and values genre's contributions to our culture).  The works he's produced over that period have ranged across such genres and styles as alternate history ( The Yiddish Policemen's Union , for which Chabon won the Hugo and Nebula awards), pastiche ( The Final Solution ), YA ( Summerland ), and swashbuckling adventure ( Gentlemen of the Road ) while indulging in unabashed love for such beloved geek artifacts as comic books, superheroes, Sherlock Holmes, and Michael Moorcock's Elric of Melniboné.  Telegraph Avenue sees Chabon writing, for the first time in years, without the guiding (some might say limiting) struct
14 comments
Read more

Back From the Windy City 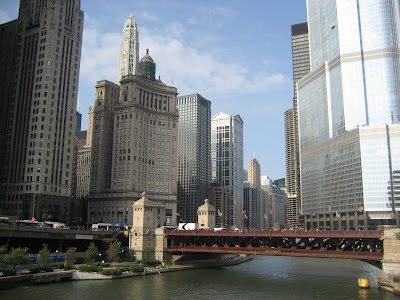 My plane from the US landed on Friday afternoon, and yet I'm still not wholly back: piles of papers and books are still where I left them while unpacking, my photographs are uncatalogued, and a stack of emails remains to be answered.  I promised myself, however, that at least the traditional con report would be done before the convention itself was more than a week over (update: well, close enough).  In brief: I enjoyed myself at Chicon 7 very much, but that enjoyment often seemed to come in spite, and not because, of the convention's best efforts.  And now, at greater length: The venue: unlike Montreal, Chicago is a city that I'm quite familiar with, with ties to both sides of my family.  My father got his master's degree there, and my mother's sister and her daughter lived in Chicago for many years, during which my family and I visited them several times.  In the last decade, however, nearly all of my relatives have moved away, and this visit was the first time
8 comments
Read more
More posts