Showing posts from June, 2008
Show all

Reading: You're Doing It Wrong

June 28, 2008
I've been meaning for several days to post about this Times Online article by Rod Liddle, linked to by Bookslut, about highly acclaimed books that don't survive their era, and whose popularity comes to seem, only a few decades after their publication, inexplicable: The columnist Catherine Bennett chose “the entire Virago imprint”, bemoaning the fact that, for political reasons, she had felt duty-bound to plough through Rosamund Lehmann and the like when there was Philip Roth waiting there, unread. ... Meanwhile, the historian Michael Burleigh suggested all “angry” black novelists (along with Herbert Marcuse and EP Thompson). Here’s a bunch of stuff we were all told we had to read by the political and cultural climate of the day; because it would be good for us and because, way beyond this, it was our responsibility to start patronising writers from minorities because it was only the oppressive white male cultural hegemony that kept them in an ethnic- or gender-defined ghetto.
4 comments
Read more 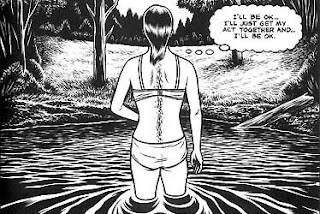 Regular readers of this blog will know that I have, at best, an ambivalent relationship with comics and graphic novels. I can see the potential in the medium, and I've read works within it that I've admired or even liked a lot, but only very rarely do I truly love a graphic work (really, I think it's just the later volumes of Sandman ). So that when a graphic novel gains praise and acclaim, I tend to file its name away for future reference. Then once or twice a year I go on a comics-buying binge, which is how I ended up, over the last week, reading three of the best-received graphic works of the last couple of years. Here are my thoughts. The earliest of the three is Charles Burns's Black H ole . The compilation was published in 2005, but individual issues were published over a period of a decade. Burns's slow and meticulous work tells in the finished result, which is illustrated in stark, black and white drawings that flit effortlessly between realism and sur
6 comments
Read more

Self-Promotion and Promotion of Others

June 25, 2008
My review of James Morrow's The Philosopher's Apprentice appears today in Strange Horizons . This is also my opportunity to plug Strange Horizons 's annual fund drive . The magazine, all of which--fiction, poetry, articles and reviews--is offered free of charge, pays all of its writers (though not its staff), and pays professional rates for fiction. They're trying to raise $6,000 this month, and with less than a week left are less than half way there. So if you'd like to help support what is, in my admittedly biased opinion and with my own contributions utterly notwithstanding, one of the best sources for criticism of genre writing (and film and TV), on- or off-line, now's the time to do it. As a further inducement, all donors are entered in a raffle for some pretty cool prizes , and there's an additional prize drawing for anyone who plugs the drive on their blog, with new prizes every week ( this week's prize is a pair of books by Tim Pratt). M
Post a Comment
Read more

June 21, 2008
There's a long, hot slog through the dull summer months yet to go before there's much of anything worth watching on TV, but as has become traditional in the last few years, a few of next year's pilots have started to leak online. Whether they were deliberately released as a way of generating buzz and creating an interested group of viewers, or simply made it online through some less kosher means, they give us a taste of what we have to look forward to. Here are my thoughts on two of them: Fringe - Let's be honest: 'J.J. Abrams does X-Files ' is no-one's idea of a winning formula. Take one television auteur whose name has become synonymous with big build-ups and poor follow-through, combine it with the second coming of a series that strung its viewers along for the better part of a decade promising a conclusion which it was ultimately incapable of delivering, and you're almost guaranteed a show that'll steal your heart and then break it. Except
5 comments
Read more

June 19, 2008
The story thus far: last year Niall Harrison published a LJ post in which he commented on the cover of Eclipse 1 , an anthology of original genre shorts and the first in a series edited by Jonathan Strahan and published by Night Shade Books. In spite of the fact that the volume's table of contents was split evenly between male and female writers, Niall noted, only male names were chosen to grace the front cover. There followed a lively and civil debate--with participants arguing on the one hand that the five names chosen represented the top five bestselling authors in the table of contents, all of whom just happened to be male, and on the other hand that this argument was self-perpetuating, and that Night Shade Books were making the perennial mistake of ignoring the existence of women as a buying demographic by pitching their product only at the traditional (white, male, middle-aged) SF-reading market--which unfortunately turned sour the minute representatives of Night Shade Bo
19 comments
Read more

June 16, 2008
Last year, when it was announced that Battlestar Galactica 's fourth season would be its last, I responded to the show's producers saying that "This show was always meant to have a beginning, a middle and, finally, an end" by quipping "Good luck trying to cram all three into a single season." I wasn't expecting Ron Moore and his writers to take me up on the challenge. Alright, so that's overstating the matter, but there is no denying that in the first half of its fourth season Galactica , which for a season and a half has seemed, not even aimless, but deliberately mired, has regained its momentum. In terms of the show's story--not the Law & Order -style ripped-from-the-headlines political allegory, not the perfunctory issue-of-the-week-in-space anthology show, not the execrable soap opera starring impossibly pretty people behaving like total assholes, not the woo-woo New Agey drug trip, but the actual story of humanity's struggle to
8 comments
Read more

It's been quiet here, I know, and in the near future the only thing I've got planned, and that tentatively, is a piece about the first half of Battlestar Galactica 's fourth season once that wraps up this weekend. But for now, have some books. Friday Night Lights by H.G. Bissinger - I don't read nonfiction, I don't care about football, and I have a great deal of trouble translating verbal descriptions of physical actions, such as football games, into mental images. So by all rights I should have given Bissinger's book, well-regarded and influential though it is, a wide berth. I'm very glad I didn't. In 1988, Bissinger spent a year in Odessa, Texas, following its high school football team and the town's all-consuming obsession with its fortunes. The picture he paints is both grand and tragic. Odessa, seen through his eyes, is a town that both worships its young football players and sacrifices them--their education, their health, their very futur
7 comments
Read more
More posts