Showing posts from October, 2007
Show all

Warning: May Cause Deep Sadness

October 31, 2007
Hot off the season 3 DVD, the Veronica Mars season 4 'pilot', Rob Thomas's attempt to sketch out the show's revamped form with Veronica as an FBI agent: part 1 & 2 . (See also the season 3 blooper reel .) The crazy thing is, I actually have a list of likes and dislikes in response to this, as though it weren't just a sad reminder of something that'll (probably) never be but an actual prelude to a new season. I think the pace could use a little picking up, but I'm pleased to see Veronica surrounded by other smart, observant, driven people, something the third season toyed with but never fully explored. You see? Madness! I was happier before I watched this.
1 comment
Read more

October 29, 2007
Publishers Weekly reports from the Frankfurt book fair : The Eggers book, an adult novel based on Maurice Sendak´s classic Where the Wild Things Are was actually acquired by Ecco last winter, but kept quiet until now. Foreign rights are in play at Frankfurt and Ecco publisher Dan Halpern is predicting, "I think it`s going to be his biggest book. I think it´s going to be huge." Ecco is publishing the book in fall 2008, to coincide with the Spike Jonze movie adaptation based on Sendak´s book, for which Eggers wrote the screenplay. Other, rejected titles for this post: 'Um, What?', and 'I've Never Read Anything By Dave Eggers and Now I'm Glad.' (Link via Maud Newton )
6 comments
Read more

October 27, 2007
Stardust (2007) - First, a word about the ubiquitous Princess Bride comparisons: these are only excusable coming from a) public relations wonks or b) people who have forgotten just how funny and smart The Princess Bride actually was (people who have never seen The Princess Bride have no excuse whatsoever). Everyone else--what were you thinking? The Princess Bride is a film that people can and do watch again and again, and though Stardust is an enjoyable way to spend an evening, and one that I wouldn't object to repeating one of these years, it simply is not in the same league as Reiner and Goldman's masterpiece. To be honest, I'm baffled at the amount and the vehemence of the buzz, both good and bad, generated by this inoffensive, pleasant film, and can only account for it by the general lack of fantasy films for adults. In itself, the film is a rather ordinary fantasy adventure story, just funny and romantic enough to get by, and with several winning, though hard
1 comment
Read more 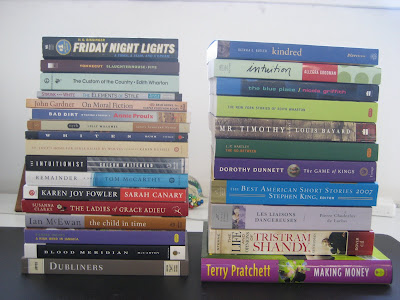 I'm back! Had a lovely time. Once again, this trip was occasioned by a family wedding (as Niall said, my relatives get married in all the coolest places), and at least half the fun of it involved meeting cousins distant and obscure, many of whom I haven't seen in several years, and some of whom I met for the very first time this week, as well as their friends and relatives. The wedding was beautiful and the party in its wake great fun. I also did the tourist thing, but everyone knows the New York highlights so I won't bore you too much with my version of them. I took a rather laid-back approach to the museums, wandering about them willy-nilly and poking my head into any exhibit that looked appealing. As a result, I had a somewhat dizzying experience at the Museum of Modern Art when I turned a corner and found myself face-to-face with Van Gogh's Starry Night . I had known, on an academic level, that the original of an image I've encountered hundreds, perhaps ev
5 comments
Read more

October 11, 2007
Not that weeklong silences have been rare on this blog recently (she said sheepishly), but there's another one coming up as I flit off to New York for yet more family nuptials. Expect me back some time next weekend. As usual, I'm unlikely to reply to e-mail or comments until I get back. See ya.
1 comment
Read more

October 09, 2007
What better way to test my ability to embed video than with the trailer for the upcoming Futurama film, Bender's Big Score ? The Nibblonians are back! Hurrah! The film is going direct to DVD on November 27th, and later on will be broken up into episodes and aired on The Cartoon Network. The same deal applies to the three other Futurama films: The Beast With a Billion Backs , Bender's Game (how has that joke not been made before?) and Into the Wild Green Yonder . (Link via SF Signal ) (My favorite Futurama quote, in case you're interested, is: "What are you hacking off? Is it my torso? It is! My precious torso!")
5 comments
Read more

October 03, 2007
Ian McShane believes the promised Deadwood films aren't going to happen: I asked him the big question Deadwood fans have been wanting to know for a while now -- was HBO just blowing smoke with its promise to wrap up the series with a couple of made-for-TV movies? Well, the answer is yes, McShane revealed to us. "I just got a call on Friday from ... a dear friend of mine, who told me that they're packing up the ranch," McShane said. "They're dismantling the ranch and taking the stuff out. That ship is gonna sail. Bonsoir, Deadwood." He went on to say that even if the movies were happening, there would be the strike to consider, and on top of that, he's committed to a filming schedule that would prevent him from doing them anytime before late next year anyway. (Link via ) I've been thinking for a while about the Deadwood situation as compared to the fates of shows like Veronica Mars , Jericho , Farscape , Futurama , and other series that have b
12 comments
Read more
More posts