Showing posts from April, 2014
Show all

April 29, 2014
Spring has sprung, and with it a whole bunch of movies I want to watch have arrived at the movie theater (as well as this bunch, see my recent review of Snowpiercer at Strange Horizons ).  Though I haven't exactly been suffering, there's certainly a somewhat fannish slant to my recent moviegoing that verges on the embarrassing--I need to get around to watching some grown-up films, pronto.  Of course, it being the end of April these are nowhere to be seen, and by the time fall and its award-bait movies roll around I'll probably have forgotten this resolution.  In the meantime, here are my thoughts on some the films I've seen recently. Veronica Mars - The Kickstarter-funded return to the world of the beloved TV series proves two things.  One, that it was always a mistake for the show's second season to pick up immediately where the first season left off and try to recreate its "mystery in a high school" plot.  And two, that while the world of Neptune, C
8 comments
Read more

The 2014 Hugo Awards: Thoughts on the Nominees

April 20, 2014
The nominees for the 2014 Hugo awards were announced last night, and now I can reveal the news that I've been sitting on for one of the longest weeks of my life: I am nominated in the Best Fan Writer category!  I want to congratulate my fellow nominees, Liz Bourke , Kameron Hurley , Foz Meadows , and Mark Oshiro (who together make up what I think is the most female-dominated slate in the category's history).  I also want to thank everyone who nominated me and encouraged others to.  It's been strongly implied, but I'll just say officially that I will be attending LonCon 3 this summer and plan to be on hand for the Hugo award ceremony. It's terribly gratifying to receive this nomination, especially at the end of a nominating period in which so many wonderful, smart people said such lovely things about me and my writing.  I'm particularly thrilled because, to the best of my knowledge, I'm the first Israeli to receive a Hugo nomination, and for that to happe
51 comments
Read more

April 16, 2014
As I say at the beginning of my review of Korean director Bong Joon-Ho's first English-language film, if you're like me then the first thing you ever heard about Snowpiercer was that it was in danger of being chopped down and dumbed down by its distributors for the sake of English-speaking audiences.  And then you were probably incensed, not only because you're fully capable of watching a 125-minute film with a small amount of foreign language dialogue and a moderate gore, and not only because Snowpiercer is one of those rare SF films that is neither a sequel, a remake, or a reboot, but because it's been getting such good reviews abroad and you wanted to see it in all its original, uncut glory. As I write in my review in Strange Horizons , to go into Snowpiercer with all this in mind is probably to do the film a disservice, because what this knowledge does is take an interesting, well-done, but ultimately thoroughly conventional SF action film and turn into the va
1 comment
Read more 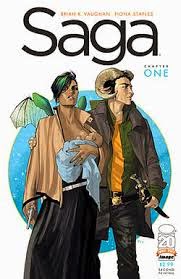 So the good news is that since the beginning of the year I've been reading up a storm, the last vestiges of the reading drought I'd suffered under for nearly two years blowing away.  The bad news is that I'm much more interested in reading books than writing about them, which is why this recent reading roundup only covers a selection of my reading this year, the others having passed too long ago for me to remember what I wanted to say about them.  (Also not discussed here: I've been rereading the Sherlock Holmes canon in publication order, and discussing my reactions on my twitter account .  The ephemeral format feels appropriate to books that I'm only returning to, albeit after fifteen years, not reading for the first time.  But I have storified my progress thus far: A Study in Scarlet , The Sign of the Four , The Adventures of Sherlock Holmes , Memoirs of Sherlock Holmes , The Hound of the Baskervilles , The Valley of Fear .) Saga : Volume 1 and 2 by Brian K.
7 comments
Read more

How I Met Your Ending

April 02, 2014
One of the reasons that I'm not so down on spoilers is that, for someone who consumes pop culture the way I do, they're essentially impossible to avoid.  Online fandom talks a big game about its spoiler-phobia, but if you've ever spent a day on twitter in the wake of a major pop culture event, you know that there's no way not to pick up exactly what happened, even if people haven't said it outright.  For someone like myself, whose geographic location means that I watch things--TV episodes in particular--a minimum of 24 hours after they've originally aired, there are only two options--get spoiled, or cut yourself off the internet completely.  I take the latter approach sometimes, in the cases of big TV events like the finales of Breaking Bad or True Detective .  But for the most part I can't be bothered, and occasionally a Red Wedding will take me by surprise--as in the case of last week's episode of The Good Wife .  And sometimes, there are shows that y
6 comments
Read more
More posts